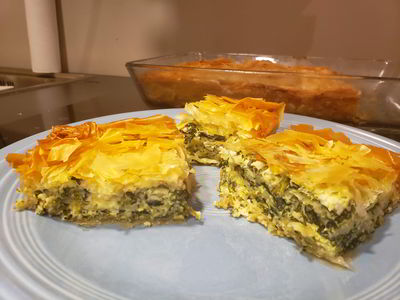 This time, I thought I’d share with you an original recipe for spanakopita, one of the most typical and popular dishes in Greek cuisine. This is very similar to what you’d find in the cookbooks or on cooking shows on T.V…  the thing is though, I got this recipe from my grandma, and my grandma knows best when it comes to pies. She was born and raised in Thessaly, central Greece, where they’re experts in all sorts of different pies. She’s been making them for almost 70 years, we call her the “master of phyllo”!

So, let’s start with the ingredients and the way to prepare it, shall we?

The recipe and preparation below are for spanakopita made in a big pan, enough for 4 hungry adults to have for lunch.

*where tsp = teaspoon and tbsp = tablespoon

½ kg feta cheese (actually, that’s optional, but I highly recommend it. Everyone knows that feta cheese makes everything better ☺ )

1 cup of condensed (or fresh) milk

½ cup of trahana (If you can’t find any, just use rice instead)

Salt (Don’t put too much, remember that feta cheese is salty itself)

* Comment: Remember to wash the spinach really well beforehand, and season it with some salt after.

For the phyllo sheets:

Put the flour in a large bowl, shape a hole in the middle and pour the liquid ingredients (water, oil, vinegar) and salt. Subsequently squeeze the flour slowly into the liquids and stir until it is becomes a workable dough. Once a dough ball forms,  place on a kneading board until you can pull the two parts of it like a gum (grandma said “stretchy”, to be precise). Cut it into 10 equal balls and leave it for half an hour to rest in a bowl covered with a towel. When the balls are well rested and relaxed, take them out, and use the rolling pin to make the phyllo sheets, rolling each ball until it is as thin as it can be.

Break the eggs in a bowl, tossin the (very well washed & dried ) spinach and the trahana, the chopped dill and fresh onions, pour the milk and olive oil and mix together well. Then crumble the feta cheese into the mixture , adding salt as needed. The filling is ready!

Sprinkle a generous amount  of olive oil on the bottom of a pan to prevent the pie from sticking on it. Then put the first phyllo sheet and sprinkle a little bit of oil, a second phyllo sheet and sprinkle it with a little oil, a third phyllo and do the same. Then add some of the filling. Repeat the process (first phyllo-oil-second one…) until we only have three last phyllo sheets left. In order to “close” the pie place the last sheets with no filling in between, only sprinkled with olive oil. Then  score the whole pie lightly (the knife shouldn’t reach the bottom of the pan or the liquids will all drip down), sprinkle with a little water and put in a preheated oven at 180 degrees C / 350 F for 1 hour (convection or not). Remember that the baking time may vary depending on the oven, the goal is to see the top of the pie turna golden color..

So, there you have it: An original Spanakopita, by an original Greek grandma. I’ve been eating her amazing pies for as long as I remember myself, with all these different fillings. But Spanakopita is by far the best one! I really hope you try it at home, and that you’re pleased with the result… Καλή Όρεξη! (Kali orexi!)