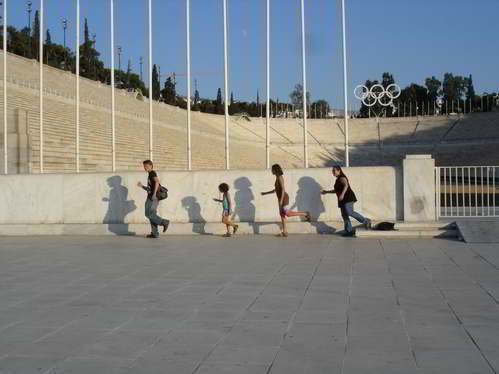 Have you ever wondered what it must have been like to witness an ancient chariot race? Can you imagine yourself in the midst of something that might be straight out of Ben-Hur? Well, the screaming crowds might only converge once every few years, but if you come to Athens, not everything gets left up to the imagination!

This is Kallimarmaro Stadium, located in the shadow of the Acropolis and made almost entirely of marble (Kallimarmaro is actually Greek for “good marble”), and it’s one of the oldest sports venues in the world. As far as arenas go, it’s an unusually interesting site, with a lot of history behind it. It’s known by a few names. It also goes as the Old Olympic Stadium because it was the primary venue for the very first modern Olympics, all the way back in 1896. Other times, you might hear it called the Panathinaiko Stadio, a reference to the Panathenaic games, which were basically the Athenian version of the Olympics that were held on the site every four years during ancient times.

So, it’s got a lot of names, and a lot of history! The marble bleachers that are there now aren’t exactly the same as the ones that Pericles might have cheered from some 2500 years ago. Originally, there was probably some kind of racetrack on the site, but those tend to not age very well, and would not  leave much of a trace. The original stadium was built sometime during the 4th century BCE, and because it underwent a number of changes and renovations over the years, the framework for the structure that exists today dates back to a big project of a Roman Senator and Athenian philanthropist named Herodes Atticus, the same guy who paid for the construction of the still-active theater at the base of the  Acropolis. I suppose if you have enough money to build your city a cool theater AND a giant stadium, you can probably get away with splurging on making the whole thing out of marble, too.

Of course, most of stadium had to be rebuilt in the 19th century before they could actually use it for anything, but enough of the original survived from the Roman days that when you walk around it now, you can look around and see pretty much the same thing the ancient Athenians saw. The stadium business basically went belly-up after the Christianized Byzantine Emperors decided to ban all of the old pagan sports and athletic festivals, so over the years, Kallimarmaro fell into ruin, and most of the marble was stripped away for other building projects. Eventually, most of it wound up buried underground, and sort of forgotten. When the Ottomans took over, people stayed away from the area because there was supposedly a coven of witches hiding in the ruins, doing whatever it is communities of witches tend to do. We might never know what exactly that might be, but we do know that if you want a bunch of ancient ruins largely untouched by humanity for hundreds of years to stay that way, making everyone believe it’s haunted by witches is pretty effective.

The witches must have left along with the Ottomans after the Greek War of Independence, because when the new nation of Greece was invigorated by a revival of interest in its ancient predecessors, Kallimarmaro was one of the beneficiaries. When the world was reintroduced to the Olympics in 1896, it was decided that a reconstructed and refurbished Kallimarmaro would be the perfect setting to showcase it. So that’s how central Athens wound up being the home of a truly ancient stadium that looks at once like it was built long ago and yesterday. It’s totally open to the public now (for a small fee, but you do get an audio tour for your euro!), and you too can walk through the underground tunnel and picture yourself, maybe a gladiator or charioteer, emerging 2000 years ago to a screaming crowd of 50,000 ancient Athenians, or standing in the center of the podium accepting a medal and an olive wreath, and maybe you’ll think about how in some ways, they weren’t so different from us after all.