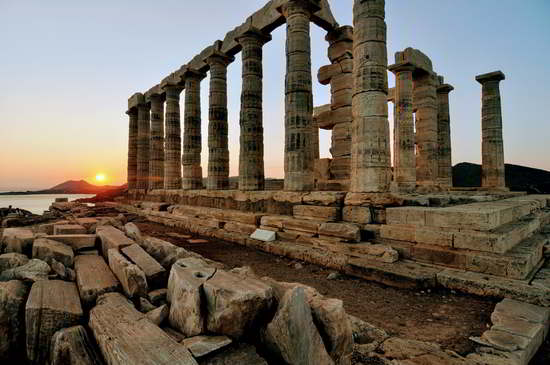 A skeptic of the Greek vacation experience might wonder what makes some of the ancient sites and temples around the country so special. “Aren’t they all the same?” They might ask. Well, a lot of temples and houses of worship built by the ancients might seem a little similar on the surface, but beyond the stone and the marble and the architectural design, what’s special is that each temple in each place really does have its own kind of character, its own intangible aura or vibe that makes it unique and unforgettable in its own way.

One of my favorites in this regard is the temple of Poseidon on Cape Sounion, just a car ride away from downtown Athens. Even the trip to Sounion is memorable—the journey starts through the chic south Athenian suburbs before winding around the side of the cliffs on the edge of the Saronic gulf, and the view is beyond spectacular. The temple itself is decently preserved, as far as 2500 year old buildings go (we’ll be pretty lucky if any of our churches are still around in the year 4500), but what’s truly unforgettable are the way the columns rise over the sea and the clifftop they stand on, a view that you’ll carry with you long after you leave Greece.

And that’s what’s really important, right? There’s nothing in the world like a sunset at Sounion; watching the shadow of the columns lengthen as the cliffs and marble become bathed in red and orange, and the sun disappears below the horizon on the glistening water. Like I said, a truly unforgettable sight. Don’t just head south of Athens for the temple and the views, either. We have some favorite tweaks on the traditional Temple of Poseidon organized big bus tour—our animal loving selves like to add some turtles to the trip, and we often stop to relax for a bit in the thermal waters of a nearby lake. After sunset, we like to head inland to our favorite spot for bbq lamb chops (though when we’ve friends in town we’re often pulled down to the beach beneath the temple to one of the seaside tavernas for dinner.

There are a lot of different ways you could do this trip, but no matter what route you take or which stops you make, it’s something that’ll stay fresh in your mind long after your meal is gone and the sun has set. And that’s just as valuable as any vacation photo album, right?

Posted in Independent, Off the beaten path