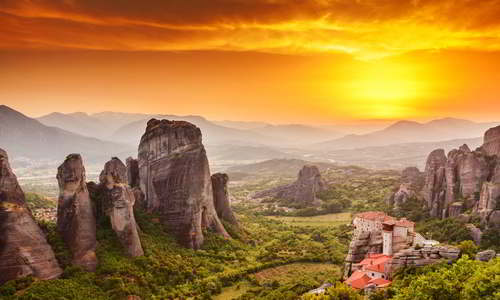 Since it’s the height of the summertime, I suppose it makes sense that I’ve been spending a lot of time fantasizing about the coast, the water, island paradises and whatnot. Unfortunately, doing that forever would just be a disservice to the rest of Greece, especially the north! Given how incredible Athens, the Peloponnese, and the Cyclades are, it might be easy to forget anything north of Delphi, but there’s a ton of amazing stuff to see there, too. The best of them might be Meteora, the northernmost of Greece’s many UNESCO heritage sites. Trust me, it’s a sight that might literally make your jaw drop.

At its core, Meteora is a series of monasteries just outside the town of Kalambaka (mushroom capital of Greece!), a few hours north of Athens. The landscape itself is spectacular: situated in Western Thessaly right in between a huge plain and the foot of the Pindos mountains, you’d better make sure you’re not the one making the drive up, because you’re going to want to look out the window the whole trip. At first, all you see are these huge rock spires, jutting out of the ground like an ancient giant started carving a big, gray, stone forest, and forgot to finish the job. Then, as you squint at the white and orange shapes on top, you’ll start to realize—are those… houses? Up there? Boom. You have arrived at Meteora!

So while archaeological evidence shows that people had been living in the caves around Meteora thousands of years ago, things really got going the 1300s when a monk named Athanasios arrived and founded the “Great Meteoron,” which is still the biggest of all the monasteries in the complex, as a way to keep him and his people isolated from any war or political upheaval that might otherwise impact their religious duties. When the Ottomans came-a-knockin’ later on in the century, it turned out that building their homes on top of inaccessible rock spires was a fantastic way to make sure that the Turkish armies couldn’t come bother them. The end result is the incredible complex of buildings and structures that you can come see and walk around today.

As of 2018, only six of the buildings are still active monasteries, with roughly fifty monks and nuns occupying them now. That means you still have to be quiet and respectful when walking through them (yes, you too can have this amazing view), although I’d be pretty surprised if the whole spectacle hasn’t already taken away all your words. The trip itself isn’t a one trick pony, either. Kalambaka is a super cute town with great food, great atmosphere, and a one-of-a-kind Mushroom Museum that’ll occupy your time in between the drive and the awesome trek up to the monasteries. We do several trips and tours that include seeing Meteora, so take a look around the rest of the site and ask us about planning one soon!

This sweet aroma announces the holidays are here!

Posted in Independent, Off the beaten path