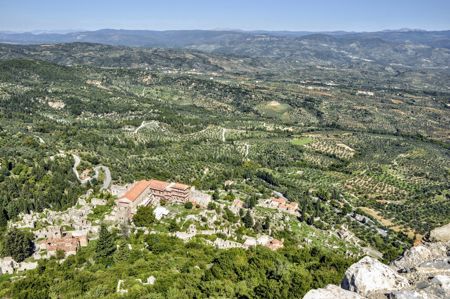 I’ve previously blogged about Sparta and all the cool things in the area, but lately I’ve been spending alot of time thinking about places I personally plan to return to when I’m back in Greece. One of these places is Mystras, a place much more “modern” than anything you’ll find in ancient Sparta, but is beautiful and super interesting in a different kind of way. Mystras isn’t your typical Greek archaeological site: it was built in the 12th century by the French dynasty that had conquered the Peloponnese as the Byzantine Empire fell apart, and after that it was occupied pretty much continuously until the 19th century by Byzantines (who took it back for a couple hundred years), Turks, and Venetians, before being more or less ditched after the Greeks got their independence in the 1820s.

So what’s cool about Mystras? Well, there’s the fact that it’s a huge medieval fortress built into the side of Mt. Taygetos! When you think of a Greek archaeological site, your mind probably jumps straight to toppled white marble columns and statues, the remnants of buildings 2500 years old that sometimes require a little bit of imagination to rebuild. Welcome to a totally different Greece! In between the ancients and the modern Greece we have today, the Peloponnese was occupied by a number of different cultures like the ones I just mentioned, and so sites like Mystras are awesome repositories for different blends and fusions of art and architecture. Given that it was a military base, Mystras has a lot of big, intimidating structures, and you’ll definitely want to visit some of the Monasteries. The Pantanassa Monastery is still home to a sect of suns, and you’re more than welcome to walk around and check out the ornate arches, porticos, and stonework around the building. Peribleptos Monastery, meanwhile, is home to some frescoes (which, in case you were wondering, are murals painted into the walls while the plaster is still fresh) from the 1350s that are some of the best surviving examples of Byzantine art of the period.

Other than that, there are several more churches worth checking out, a fun archaeological museum, and of course, there is the “Palace of the Despots,” which for hundreds of years was one of the most powerful places in the Mediterranean, second only to Constantinople in the hierarchy of the late Byzantine Empire. It was begun by the French, eventually completed by the Byzantines, and modified by the Turks and Venetians, so in some senses it’s a perfect architectural picture of Greece’s multicultural history. It’s not a huge town by any means, and definitely doable in a day trip if you’re going to be visiting Sparta or anywhere else around the southern Peloponnese. Ask us about it!

Posted in Off the beaten path