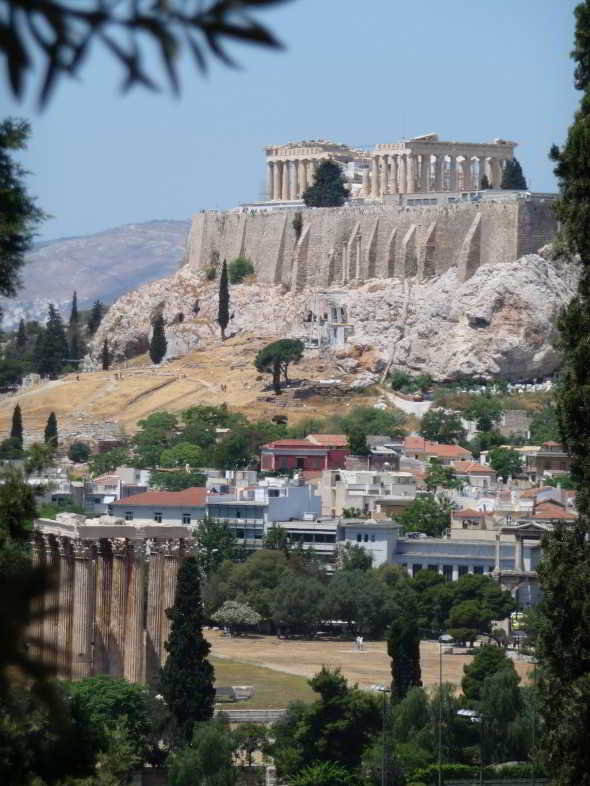 Wait a minute, I thought to myself taking another sip of coffee, we have guests & clients who will be in Athens the 17th of April, which means that on the 18th, International Day of Monuments, they can spend it all sightseeing in Athens. Wow, now that’s what I call luck! So since Greece offers a free entrance in the beautiful sights, let’s figure out what they should do.

For sure, for everyone visiting Athens, the first stop should be the rock of Acropolis, with the temple of the goddess-protector of the city, the Parthenon. Usually, you’ll find yourself climbing up those shiny stone steps with the hot sun burning you right over your head, so never forget your sunscreen, water and hat or glasses. Trust me, I’m talking out of experience. You finally reach the top, most times covered in sweat, but the result is surely rewarding: The temple is so much more majestic than you would have thought, tall and still beautiful, after all these centuries and troubles it has been through.

The museum of Acropolis is my next, natural step. It is a brand new, beautiful building which has so many important things to check out inside. The first thing you see is the four different models of Acropolis during different ancient periods, and how it was being constantly changed and then you move on to the two floors exploring the different aspects of life in Athens, and of the monuments that were once charming the Parthenon during the Golden Age of Athens.Next off is Ancient Agora, the place where ancient Athens used to gather for selling goods, the ancient market. We must see the temple of Hephaestus located on the western part of the Agora and of course the Stoa of the Philosophers, a roman era building that was used for philosophers to lecture and converse, which is currently serving as a museum.

As you’re leaving the Agora walking towards the main avenue, right across the street, you will see it: The temple of Zeus. Well, technically, it is the columns of the temple of Zeus, since the rest has disappeared through the years. It is a ten-minute walk from the Acropolis museum, also in a very sunny spot and also a breathtaking sight.I know I’ll also be including in their itinerary a trip south, along the Athens Riviera, past the beaches (and if it’s warm perhaps they’ll dip their toes in the sand & sea), out of the city, to the nearby city of Sounion, for a visit to the temple of Poseidon, a sight many of them may have seen in Greece marketing campaigns: the temple standing proudly on the rock, overlooking the sea of Athens for any incoming threats.

Of course, we can’t talk about monuments in Greece without mentioning some outside of Athens, like the oracle in Delphi, where Alexander the Great heard he was God on Earth right before starting his quest. Of course, there’s also the ancient theater of Epidaurus in the Peloponnese, home of so many events in the past, but also in modern times, but let’s talk about this next time!At the end I am honestly torn between what they’ll do on this day. But I do know one thing for certain: Greece, and specifically Athens, is one of the best places to be on the April 18, International Day of Monuments. If you haven’t had the chance to do it yet, put it in your bucket list.