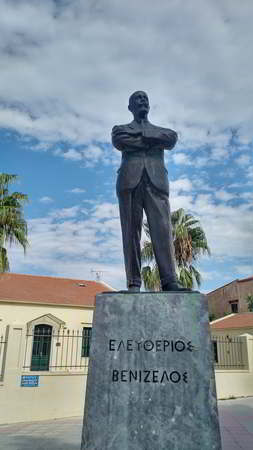 It’s a big day in Greece today! Were he still around, today would be the 154th birthday of Eleftherios Venizelos, who some might consider the George Washington (or maybe the Abraham Lincoln) of the modern Greek state. One of the most important political figures in Greek history this side of Pericles, Venizelos rose to fame and power by helping to orchestrate Crete’s independence before founding Greece’s Liberal Party, guiding it through the first World War, and leaving a legacy monumental enough that the biggest airport in Athens bears his name.

The son of a Cretan revolutionary, Venizelos was born in Chania, where his house has been today made into a museum. While Greece had achieved independence before he was born, Crete was still a part of the rapidly-disintegrating Ottoman Empire, a situation that the numerous failed revolts occurring over the course of the 19th century would indicate did not particularly please the Cretans. Venizelos first became prominent when tensions boiled over in 1897, when his natural eloquence and diplomatic prowess made him a natural leader for the Cretan rebels, who with Greek and other foreign aid finally managed to remove themselves from Ottoman control in 1898.

After a decade of turbulent politics in Crete, Venizelos found himself moving to Athens in 1910, when a quasi-coup led to new elections and the large host of political newcomers looked to him for leadership. Out of this came the Liberal Party, which became a dominant force in 20th century Greek politics and has since been the spiritual ancestor of many Greek political movements. Greece had existed mostly as a monarchy since independence, Venizelos spent most of the years leading up to World War I enacting a series of popular social and political reforms that modernized the Greek state and put more power into the hands of its people.

He was still a polarizing figure: constantly at odds with King Constantine, who still held a lot of power, Greek politics by the end of the decade had more or less factionalized into those who supported the King and those who supported Venizelos. Despite the fact that he was not always successful in his time, his ideas and ideology stuck around far longer than the conflicts he engaged in during his life. He remained in politics on and off from the next twenty years or so, until his death in 1936. Though he had many detractors like any politician, Venizelos’ dedication and profound impact on Greek life and politics were such that he is remembered with pride by the Greek people today, and his accomplishments are definitely worth celebrating, today of all days.

Scroll back to top